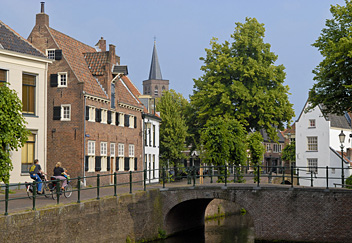 This path is located in the centre of the Netherlands, and most villages are well served by trains and/or busses. The path is circular, starting and ending in the city of Utrecht. It is described in a topo guide and marked yellow-red.

The city of Utrecht was an important centre of power in mediaeval times, before the proclamation of the Republic of Holland. The archbishop of Utrecht was engaged in a long-term power struggle with the duke of Gelre.

Therefore, in a "way", this path is historically related to the Maarten van Rossumpad, which is a witness to this struggle.

The main attraction of the Utrechtpad can be found in the variety of landscapes. The start is at the former residence of the archbishop of Utrecht, the Domtoren. First one visits the area where river and hills meet, and many very old land houses and castles lie, hidden in forests. Here we will hit river Lek: it is one of the best river landscapes in the Netherlands. Next we cross the forested hills of the Utrechtse Heuvelrug, sand deposits of the ice age. The area north of it consists of poor grounds, relatively recent cultivations and a bit gloomy. Then there is the mediaeval city of Amersfoort, the geographical centre of the Netherlands. You can climb the tower, and look back to the Domtoren in Utrecht, and discover that the latter one is higher, because the archbishop was more powerful. We are walking in the direction of Utrecht again, and we will pass pretty moorlands and forests. The last stage is along the river Vecht where we will enjoy the rich inheritance of the Golden Age.