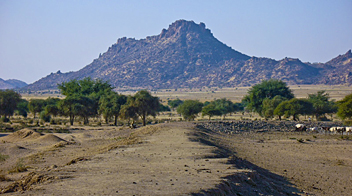 Chad is a large desert country in the centre of northern Africa, west of Sudan and south of Libya. It is mainly a wide basin surrounded by mountain ranges to the north, east and south. Only the south is more fertile savanna with marshes and wetlands. Lake Chad is on the far western border with Niger, Nigeria and Cameroon. Chad's highest peak is the volcanic Emi Koussi (3445 m), part of the Tibesti mountains in the Sahara of northern Chad.

There appear to be some hiking possibilities in the Tibesti Mountains, but conditions are extreme in terms of drought, heat and cold, and lack of any facilities whatsoever.