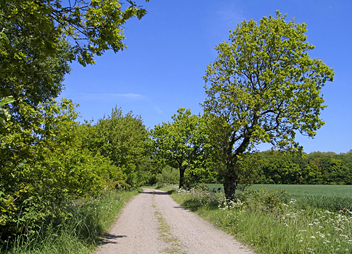 Part of the North Sea Trail.

The Drivvejen is a collection of ancient trade routes running from northern Jutland to the south. Along these wide, weathered drove roads, cattle and merchandise were transported in large quantities and variety. Oxen pulled the wagons with pigs and geese, sheep and cows followed.

For the walker the trail is a chain of historical details. The story is told through ancient marketplaces, medieval churches, old Inns. The earliest churches were built with volcanic tuff from the Rhineland. The same stone was used in churches in Friesland and Groningen (Netherlands). The path passes through Denmark's oldest town: Ribe.

The route runs through the interior. Occasionally it is possible to make a detour and reach the sea. The landscape is agricultural with some forest and heathland.

Accommodation is plentiful: camping sites and cabins, inns, hotels, B&Bs, farms, youth hostels. Well marked. As usual, maps and leaflets can be ordered from the tourist offices, or downloaded from the internet (links below).